Are the Benefits of Alkaline Water a Myth?

Are the Benefits of Alkaline Water a Myth

Why do some people claim that the benefits of alkaline water are a myth? 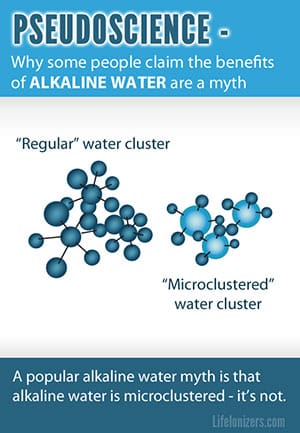 How Dr. Emoto’s microclustering myth got started: Dr. Emoto built upon a science fact called hydrogen bonding to create his myth. He claims that the molecules in alkaline water form hexagonal clusters. Others used that myth to claim that water with these clusters is easier to absorb than plain water because plain water has larger clusters.

Microclustering is a myth: Nobody has ever physically observed a water molecule cluster. Even with today’s most powerful microscopes – there is no physical evidence to examine.

The reality is that due to process called hydrogen bonding, water molecules may cluster together but only for picoseconds. A picosecond is a trillionth of a second Hydrogen bonding can happen in any water, not just alkaline water. Because there is no evidence to support it, microclustering is called a myth by chemists and physicists.

The real reason alkaline water is easier to absorb: Alkaline water  is easier to absorb than regular water because a water ionizer alters the composition of the mineral compounds in tap water. Tap water contains mineral carbonates, mostly calcium bicarbonate and magnesium bicarbonate. Those mineral compounds make your water hard. They can also make your water harder to absorb. They are the reason why you need more detergent when you wash clothes in hard water.

The penny test. Another simple chemistry experiment you can do to compare plain water to alkaline water is called the penny test. You simply use an eyedropper to put drops of water on the side of a penny, counting how many you put on until the water overflows the side of the penny. What keeps the water from overflowing the penny is the water’s surface tension. The higher the surface tension, the more drops you will be able to fit on the penny.

Is alkaline water hydrogen rich or is it oxygenated?

Note that this reaction produces H2 – hydrogen gas – in addition to calcium hydroxide. In fact, the process used by water ionizers, called  electrodialysis, is used in machines called hydrogen generators to make hydrogen gas from water.

Life Ionizers guarantees: You’ll get more molecular hydrogen from a Life Ionizer than any other brand of hydrogen water machine.

“Some studies suggests that alkaline water may help slow bone loss, but further investigation is needed to determine if this influences overall bone mineral density and if the benefit is maintained over the long term. “

Which studies was Zeratsky referring to?

The four studies above are physical evidence that you can examine. This is proof positive that the bone health benefits attributed to alkaline water are not a myth. Note that Zeratsky says that “further investigation is needed”. That is a fact, further investigation of the effects that alkaline water has on health are needed. The problem is, there really isn’t any money available to conduct that research. Most of the money to do medical research comes from Big Pharma, and they have no interest in seeing alkaline water replace any of the drugs they are selling!

There are over 40 that examine the potential health benefits of alkaline water, but additiona research is needed to confirm the findings in those studies. The problem is that legitimate medical researchers are put off by mythical claims like microclustering, so they won’t bother to investigate.

Life Ionizers has criticized water ionizer companies like Enagic™ Kangen™ for that reason, and we will continue to do so. Their mythical claims are easily dismissed by doctors, chemists, and anyone with a basic understanding of chemistry. They make alkaline water look like snake oil. We call on all water ionizer companies to stop making mythical claims about alkaline water and start taking science seriously.

Got Facts? If you would like to know more about the benefits of alkaline water and the studies they are based on, give us a call at (877-959-7977)