How much weight could you lose drinking alkaline water? A 2011 study suggests that you could lose about 12 pounds in two months – just by drinking alkaline water!  The study,  The effect of daily consumption of 2 liters of electrolyzed water for 2 months on body composition and several physiological parameters in four obese subjects: a preliminary report. is the first clinical evidence documenting the benefits of alkaline water for weight loss, detoxification, and blood pressure and more.

How the study was done 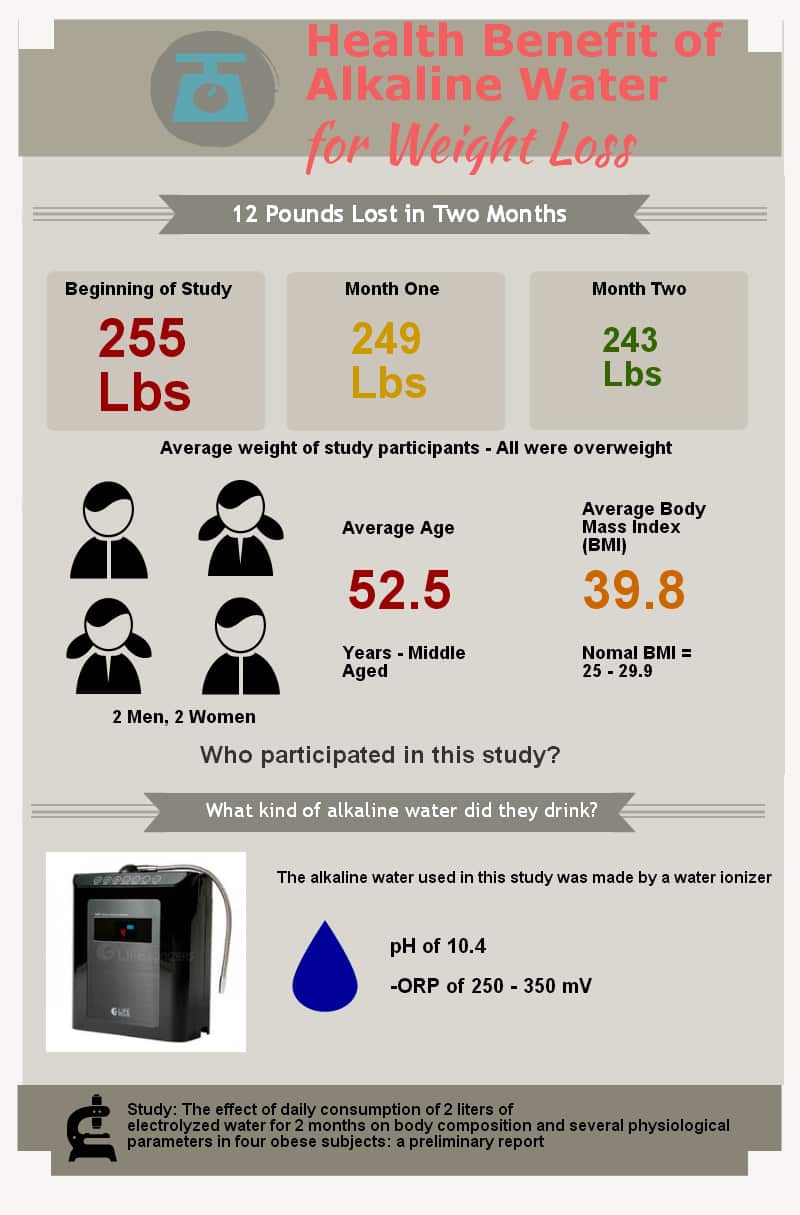 This study followed 4 middle-aged, obese individuals  for a two-month period. The test subjects continued eating their regular diet during the study.  Each of person received  a complete clinical exam at the beginning of the study before they started drinking alkaline water. They were then re-tested  1 month later, and again at 2 months later.

Clinical evaluations were performed to check

The people participating in the study drank alkaline water with a pH of 10.2 – 10.6 there were no side effects were reported. The study was conducted in Hendersonville NC, using local tap water that was ionized and alkalized by a water ionizer.  Hendersonville has fairly soft water, with Total Dissolved Solids (TDS) of 30 parts per million. This is very low mineral content for tap water!

By way of comparison, Mineral water has a TDS of about 250 parts per million or higher. Because of this, the beneficial effects observed in the study can only be attributed to the alkalinity provided to the water by the water ionizer.

One of the surprising things found during the study was that all four study subjects discharged high amounts of heavy metals in their urine. Researchers observed that the levels of heavy metals the test subjects discharged in their urine increased in the first few days after they started drinking alkaline water. The heavy metals were being drawn out of the study participant’s tissues, because those heavy metals are not found in Henderson tap water. The only metal found in Hendersonville NC tap water is copper (0.09 mg/L 2013 US EPA annual report). Researchers conducting the study concluded that alkaline water was effectively drawing heavy metals out of the test subjects’ tissues. Previous articles on this blog have reviewed other studies that show alkaline water may protect against the toxic effects of mercury.

Do your own 60 day alkaline water weight loss study! If you are thinking of taking the plunge to see if alkaline water can help you lose weight, Life Ionizers offers a 60 day return policy. This means you can give it the same amount of time that was used for this study, and see what the actual effect on your health and weight will be. If not satisfied, you can return the ionizer.

Want to give alkaline water a try? It’s easier than you think, call us today at 877-959-7977 we have special offers and discount programs for people with health challenges!

Abraham, Guy, and Jorge Flebas. “The effect of daily consumption of 2 liters of electrolyzed water for 2 months on body composition and