The Benefits of Molecular Hydrogen for Arthritis 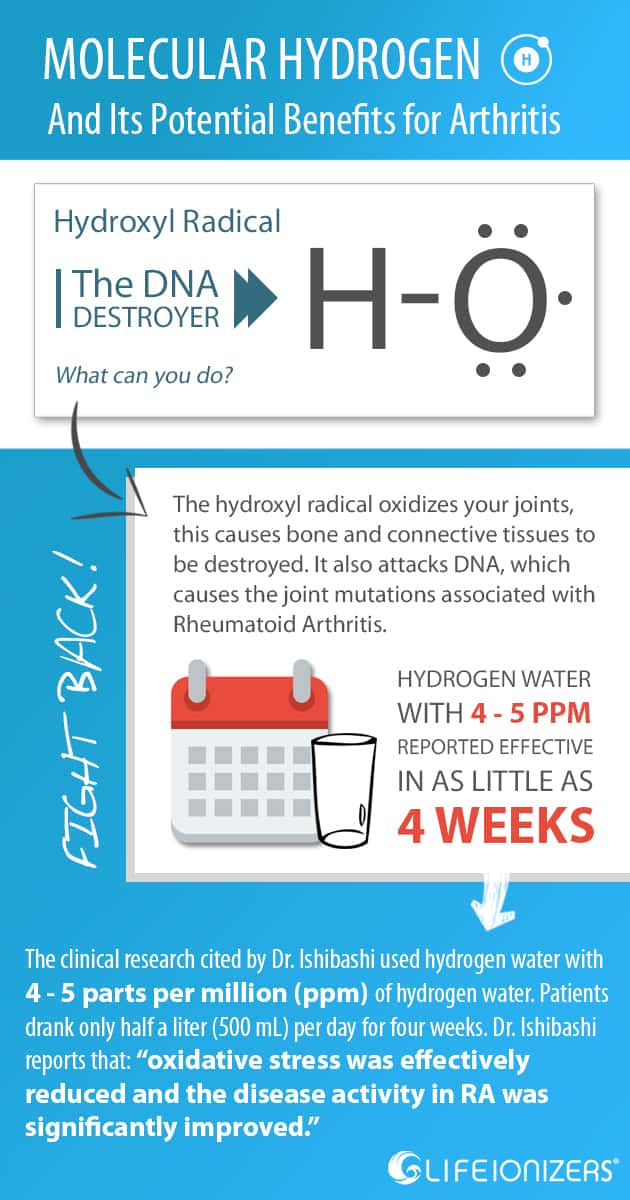 The Hydroxyl Radical: The silent killer behind Rheumatoid Arthritis

That’s why doctors often prescribe antioxidants to try to slow down the progression of Rheumatoid Arthritis. The problem is, those prescribed antioxidants show only limited effectiveness. Sometimes, they aren’t effective at all. The problem with conventional antioxidants is that the molecules they are made of are too big to enter the cells where the hydroxyl radical is doing the damage.

Molecular Hydrogen may be the most effective antioxidant

The clinical research cited by Dr. Ishibashi used hydrogen water with 4 – 5 parts per million (ppm) of hydrogen water. Patients drank only half a liter (500 mL) per day for four weeks. Dr. Ishibashi reports that: “oxidative stress was effectively reduced and the disease activity in RA was significantly improved.”

There is only one hydrogen water machine that can produce hydrogen water with 4 – 5 parts per million molecular hydrogen: The Life Ionizers MXL-15. We tested it ourselves, you can even watch the video of that test:

To make that kind of hydrogen water in the lab, scientists use very expensive laboratory hydrogen generating equipment. Life’s MXL-15 is the first hydrogen water machine that puts this special, healing water into the hands of the public.

Test it for yourself: If you are thinking about investing in an MXL-15, but are wondering if it will work for you, we have great news: You can try an MXL-15 in your home for up to 75 days to see if it works for you! If it doesn’t, you pay only a 15% restocking fee. It’s like being able to rent the machine and try it out before you buy it!