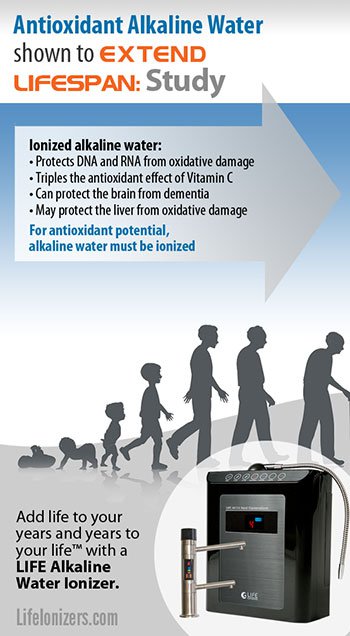 Ionized alkaline water’s antioxidant potential may add years to your life, and life to your years

Antioxidant alkaline water for extending life: The evidence continues to pile up

The study, called Alkaline Water and Longevity: A Murine Study, isn’t the first study to suggest that drinking ionized alkaline water can extend life. It builds on previous laboratory studies that explored ionized alkaline water’s potential to act as an antioxidant. Studies performed on Caenorhabditis elegans a tiny worm that scientists regard as a model organism: A relatively simple organism that shares many important biological characteristics with humans. Caenorhabditis elegans is used extensively in lifespan research. In fact, scientists believe that studying apoptosis – cell death – in Caenorhabditis elegans may hold the key to counteracting the effects of aging in humans, and that it will provide clues about diabetes, cancer, and other diseases.

Research performed on Caenorhabditis elegans showed that ionized alkaline water significantly extended their lifespan, increasing by 11% to 41% over study controls. Research also showed that ionized alkaline water significantly reduced the accumulation of Reactive Oxygen Species (ROS)in Caenorhabditis elegans. Excessive levels of ROS in the body cause accelerated aging and are a factor in the development of disease.

Alkaline water and longevity: What the study found

Researchers divided 150 mice into three groups of 50. All groups got the same food, but group A received ionized alkaline water from a water ionizer. Group B received water alkalized by an alkaline concentrate used to alkalize drinking water. Group C got conventional tap water in the 6 – 6.5 pH range.

Time – Caenorhabditis elegans typically live for about 3 days. So a longevity study on them can be conducted in a single work week. The mice used in Alkaline Water and Longevity: A Murine Study typically live for about two years. So that study was concluded in three years’ time, long enough to see how ionized alkaline water affected the mice over their entire lifespan. Humans live for decades. In fact, alkaline water ionizers were only first recognized as medical devices in Japan in the late 60’s – within my lifetime. There just hasn’t been enough time for science to reach the human-trial stage of ionized alkaline water longevity research.

Cost – An experiment on Caenorhabditis elegans is very cheap. The worms short lifespan and simple biology makes it very economical to work with them. Mice are more expensive, but they’re still not a budget-buster. Human clinical trials cost millions of dollars. To get FDA approval for a new treatment can easily cost over a billion dollars and takes decades to complete

Complexity – Mice and Caenorhabditis elegans are simple creatures. That makes them useful model organisms. But humans’ physiology mind-bogglingly complex. That makes it much more difficult to design an experiment that will provide useful scientific results. That complexity adds tremendously to the cost of human trials. It’s because of the complexity that human clinical trials are always the last in a long line of research that happens when a potential new treatment – like ionized alkaline water – is discovered.

What we do know

For alkaline water to have antioxidant potential, it must be ionized

Yan, H,  and et al. “The neuroprotective effects of electrolyzed reduced water and its

Hanaoka, Kokichi, Sun Dongxu, and et al. “The mechanism of the enhanced antioxidant

PrevPreviousThe FDA is redefining what Healthy means. What could go wrong?
NextShould you buy a Used Kangen Water Machine?Next